During our Berlin tour through the government district, we discover old and new government quarters, real Wall history and many of the highlights, including the Brandenburg Gate, the Reichstag Building and Potsdamer Platz

The starting point of this exiting tour is Potsdamer Platz. Provided with lots of archival material we relive the demise and the rise of a whole area, we follow the traces of the Berlin Wall and discover a hidden watchtower surviving the GDR. 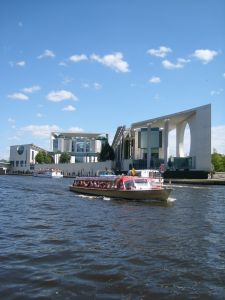 In Nazi Germany’s center of power we learn about Hitler’s Bunker and we discuss why the Holocaust Memorial has been built in such an unlikely neighborhood.

The Brandenburg Gate stands out both as a symbol of Cold War and the collapse of the Wall.

At the end of this tour we explore at the Regierungsviertel. We get to know how and why the architecture was planned and realized. We admire the vast amount of space and follow the last traces of the Wall along the old border between East and West Berlin.

There is hardly a more exciting city tour!