A tour of Berlin's historical roots, the historical harbour, a fishing village, hip neighbourhoods, green parks and loads and loads of water. We set out on an an unusual Tour to see Berlin from a different perspective - The edges of its rivers.

The Riverside Tour is really a bike tour of a different kind. You don't need a boat to explore Berlin's riverside...Just a bike and a guide. 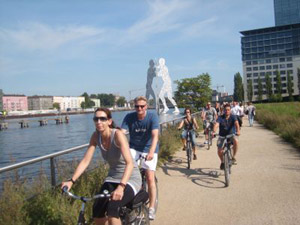 On this Tour we will explore magnificent backyards and an overwhelming amount of water. Our journey is moving on trails and paths that are off-track usual waterways. Our Berlin Riverside Tour has plenty of different sides to offer.

First stop of our Bike Tour is the ancient heart of Berlin (historische Mitte) with the Museumsinsel (museum island) and the Schlossplatz (palace square). 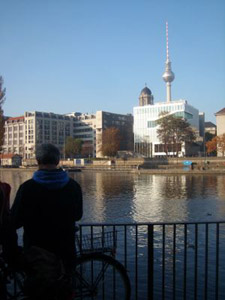 Berlin's beginnings as a tiny fishing village and development into a modern city couldn't possibly be more matching our Riverside Tour.

On our Bike Tour of Berlin's rivers we pass the historical harbour with its steamboats resting at the quays. Watching from the river, the city shines in a different light. Let's change sides to take a closer look at the opposite bank of the Spree river and the East Side Gallery, an open-air gallery consisting of the longest remaining section of the Wall with a unique art collection. 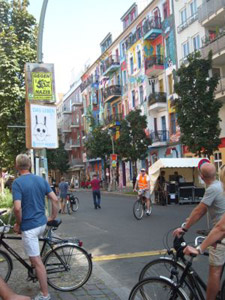 Cycling along the river, the beauty of the Oberbaumbrücke, the bridge linking the districts Kreuzberg and Friedrichshain, is at its best. We'll hear stories about the sophisticated border system and how it was set up, and learn of spectacular stories of fugitives trying to flee the regime. You'll get all the facts about Berlin's transition into a boom town, including Mediaspree, an ambitious renewal project to turn the Spree area into a media and business park. First settlers have already arrived, which demonstrates all of Berlin's ever-changing character.

Next we will take a dive into the eventful past of the fishing village Stralau, who's seen quite a number of changes.

Cycling past the river, Berlin offers a huge water area to overlook, riverside promenades and the yacht harbour. The Stralau peninsula makes you forget that you are in the middle of a hectic city.

We leave the Spree river behind and follow the watercourse along Landwehrkanal to explore the trailer village Wagenburg Lohmühle - an interesting piece of alternative lifestyle. Speaking of it, the hustle and bustle of life in Kreuzberg and its chequered past is just as much part of our Riverside Tour, as the renowned Kreuzberg backyards and its historical yards.

Final stages of our riverside tour are Luisenstädtischer Kanal, the remains of the old town wall and one of the oldest traditional restaurants in Berlin.

Enjoy the German capital from a different angle. Join us on our Riverside Tour of Berlin!