Our full day bike tour is an impressive journey of Berlin’s hip neighbourhoods, pairing urbanity and liveliness with rich nature

Get authentic insights off roads usual routes on our Berlin Neighbourhoods and River Spree Tour. Experience the impressive variety of Berlin's neighbourhoods. Each one with its own, unresembling character and vast spaces inbetween them. Particularly the parks and the wealthy waterfront in Treptow, but also the surroundings of the closed down Tempelhof Airport, to name just a few. 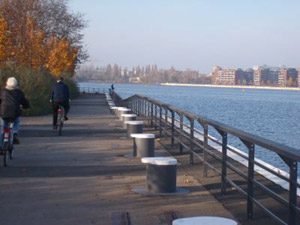 Where we go on our Full Day Tour Berlin Neighbourhoods and River Spree:

We start off in Berlin's oldest park, Volkspark Friedrichshain.

On winding roads we approach Stalinallee, a boulevard once designed to demonstrate the greatness of socialism. In some way, it really makes one think of Moscow. In the district of Friedrichshain we will explore houses that were once occupied by squatters and the rerstaurant-lined Simon-Dach-Straße. 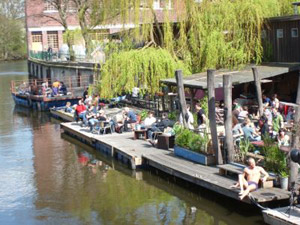 Shifting the scenes, our bike tour has reached the Rummelsburger Bucht and the Stralau peninsula. Changing from a hive of street activity, the cityscape has turned into an idyllic spot with riverwalks and yacht harbours encircled by an exuberant greenery. Looking across the water, you hardly believe that we're still in the city.

Erected at the far end of Treptower Park and surrounded by a military cemetery, stands the tall statue of a Russian soldier commemorating the lives of the soldiers lost during the Battle of Berlin, the famous Soviet War Memorial. 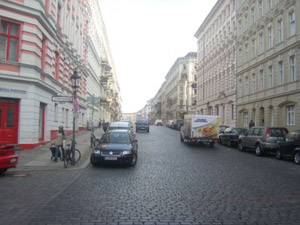 Our route is leading us into the neighbourhoods of Kreuzberg, where we are awaited by trailer a village situated within the former death strip, a mix of cultures and the canal banks of Landwehrkanal. Standing at Kottbusser Tor and Oranienstraße you feel Kreuzberg pulsing with life and vibrancy; A hot spot especially during the turbulent 1980s. 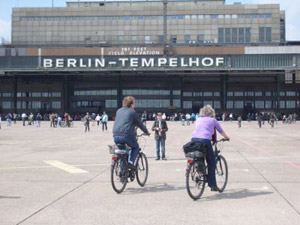 Via the bed of a decommissioned canal we are moving towards Airport Tempelhof. The vastness of the airport that was the focal point of the Berlin Airlift, gets the better even of New York's Central Park. Its scenery is best enjoyed in a nearby beer garden.

Moving through the Gründerzeit quarters feels like travelling back to imperial times. Along the rows of restaurants lining up on Bergmannstraße, we're making our way to the Kreuzberg Waterfall and the National Monument. From here we'll make our journey back.

The Full Day Tour Berlin Neighbourhoods and River Spree is certainly one of our most interesting tours.

Throughout the tour we cover a distance of approximately 25-30 kilometres.